Thailand is starting to roll out pre-exposure prophylaxis (PrEP) for HIV prevention among key higher-risk groups in high burden provinces, scaling up PrEP pilot projects within the national health system. The announcement was made at the satellite session “Breaking barriers and building bridges toward sustainability of the AIDS response in South-East Asia” during the International AIDS Conference in Amsterdam, Netherlands.

At the session, Dr Panumard Yarnwaidsakul, Deputy Director-General of the Department of Disease Control, Ministry of Public Health, said that the country is moving from trials and demonstration projects to policy and practice. PrEP now is a core part of the combination prevention package in the national HIV response in the country. Mr Yarnwaidsakul added that Thailand is also in process of including PrEP provision as part of the benefits package under the country’s universal health coverage.

As with many countries in Asia and the Pacific, Thailand's epidemic is focused among gay men and other men who have sex with men, transgender people and people who use drugs. The representatives of the Thai government acknowledged that PrEP is cost-effective and is an innovative approach for people at substantial risk of HIV infection.

Randomized trials have demonstrated that PrEP can decrease HIV incidence among at-risk populations, including men who have sex with men and sero-discordant couples. It has been shown that offering PrEP can encourage more people at higher risk to attend HIV clinics, undergo HIV testing and access either PrEP or treatment depending on the test result.

In Thailand, the discussion about offering PrEP at scale started in 2010.

The satellite session learned from "The Princess PrEP", a successful key population-led PrEP initiative under the support of Her Royal Highness Princess Soamsawali and PEPFAR/ USAID LINKAGES Thailand project.This effort served as local evidence to support the development of PrEP roll-out, where key population-led health services are a critical component.

As a next step, the Ministry of Public Health aims to train health care workers and key population peer providers to deliver PrEP. 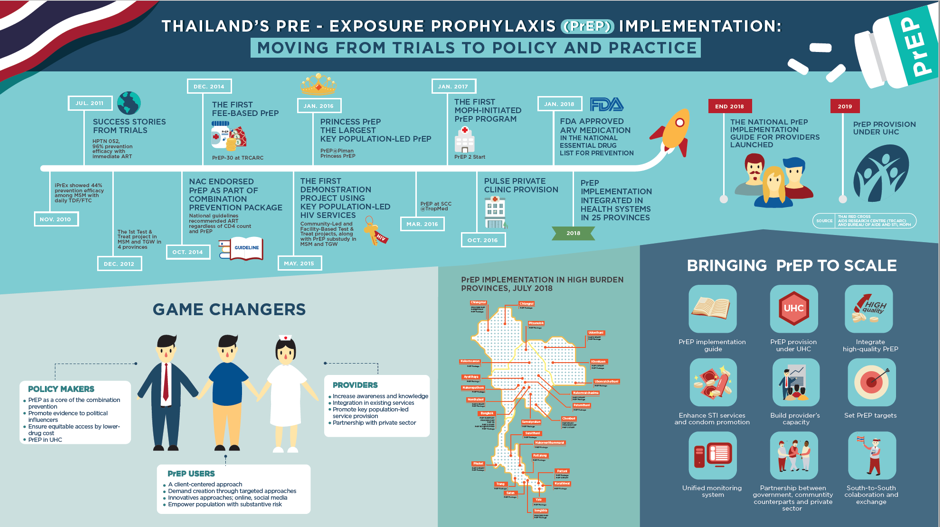